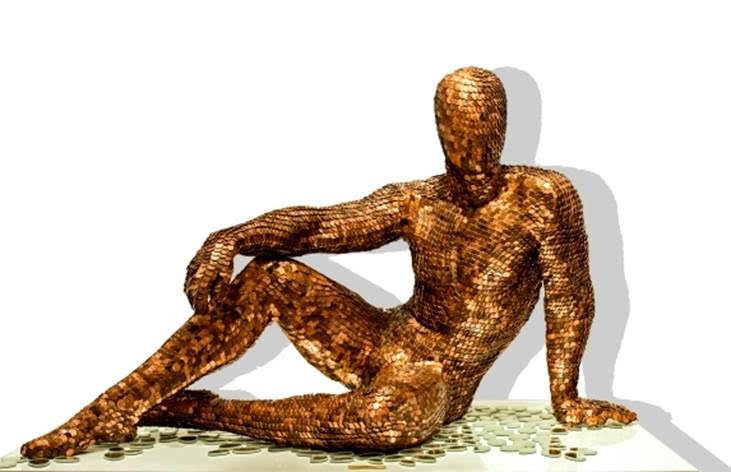 Exuberant, Vibrant and Prodigious are the recent words used by a New York City writer to describe William Braemer’s unique talents. It would be hard to find anyone surprised by William’s artistic success. Those who know the artist personally or professionally have come to expect nothing but grandeur and brilliance from this Cuban American artist. In reality, William Braemer’s artwork is the consequence of an amazing life experience and a personality that hungers for rich tasting adventures. Like a slow brewing, rich tasting stew, William’s artwork is peppered with valiant colors, rich strokes and tempting themes. With color on the walls and a feeling of success at painting on canvas, William discovered a great desire from within to sculpt. He describes it as his “inner yearnings that lead to the creation” of his first penny sculpture: Common Cents.
From there, abstract figurative subjects were born on surfaces covered by mixed media as well as gleaming pennies.As a young man, William was exposed to the art auction houses of New York through his father’s work. William moved to Europe during the 1980’s. While living in Florence, he was inspired by the city’s rich artistic history and its alluring culture. From that moment on, he began to pursue his passion for art with willingness he had not experienced before. “I have to express my gratitude, my excitement about life, and the joy I experience every day,” is what Braemer tries to communicate on canvas. His artwork has been exhibited from Art Miami to Dubai, from Paris to New York and from Los Angeles to Beirut. He has commissioned to do many private works and there seems to be no end to his creation.