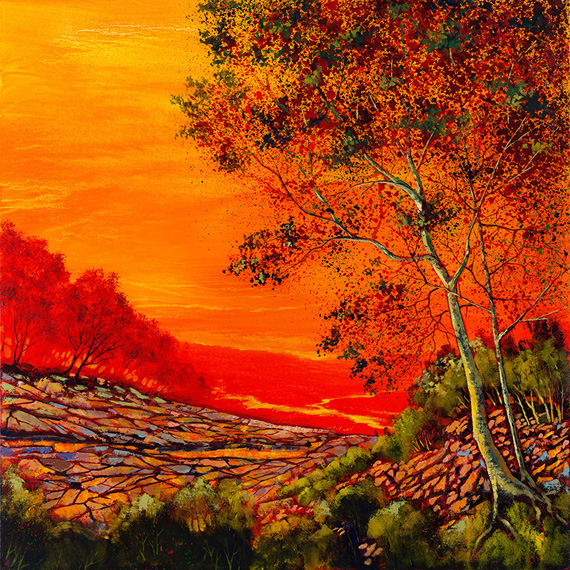 Inspiration: When Ford decided to pursue his painting career, he traveled the world for a year to seek inspiration, discovering stunning vistas and “magical” places. As a former professional photographer with the ability to paint photorealism, his creative side prefers to paint his own interpretation of these remembered places. He has been sought after for his photorealistic skill, however, after his years as a photographer, he felt this was too redundant a genre for him to pursue. So Ford never paints from a photograph, just his imagination.
Japanese Influence: When Ford was 12 years old, his father was stationed in a small Japanese village with the Air Force. It was here that Ford found an elderly Japanese master painter to be his mentor and officially began his artistic education.
BFA in Painting: Ford graduated with a degree in painting from the University of Mississippi where he was noted for his accomplishment in mastering all genres from abstract to photorealism. He was also the college newspaper’s celebrated cartoonist. Not only was Ford a naturally gifted painter, but he was also President of the National Honor Society, voted into Phi Beta Kappa, and attended college on a full academic scholarship.
Loving Acrylics: Ford prefers to use acrylics; partly due to the time oils take to dry. He has found that in using this medium he is able to be more spontaneous with his work, thereby fostering his seemingly endless creativity and enabling him to create such a phenomenal body of work.

Painting Without a Plan: Ford does not approach the canvas with a specific idea in his mind for his work. He begins each painting with its base coat, plays with water on it, and from there he lets the painting “tell him” what it will evolve into. This trust in the creative process, and in himself, not only exemplifies optimism but ultimately provides a work of art that exudes it.
Stress-Free Painting: The optimism and “stress-free” nature of Ford’s paintings have a lot to do with his approach of never belaboring over one piece. If he isn’t sure where one is going, he simply moves to another canvas until he becomes inspired. Often one painting re-inspires another.
Music Sets the Mood: Every painting Ford paints was created with music surrounding the process. From classical, rock or jazz, Ford cannot imagine painting without enjoying a good tune. His most common musical inspiration is the Beatles.

If he couldn’t paint, Ford probably would have become a musician. 8. Lake Studio Setting If you wondered why Ford’s paintings have so much reflective water inspiration, it could be that his home studio overlooks a beautiful lake. As the son of an Air Force serviceman stationed in a small Japanese village, Ford’s artistic sensibilities began to take root under the nurturing eye of an elderly Japanese painter when he was just twelve.
After graduating from the University of Mississippi with a BFA in painting, Ford moved to Atlanta, Georgia where he realized a natural talent for photography.

During the late 70’s and 80’s Ford established his reputation as Atlanta’s premier fashion and commercial photographer. The early 90’s, however, brought a compelling urge to return to painting. He began painting again whenever his schedule permitted, which wasn’t often enough to satisfy his creative mind. So in 2000, as he approached his 50th birthday, Ford decided that he would no longer deny his passion for painting – despite his success and stature as the city’s top photographer.
Believing his return to painting deserved 100% dedication, Ford sold his photography business and never took another professional photograph. He then set off to travel the world and seek inspiration. After exploring different painting styles and themes, he found tremendous fulfillment creating contemporary landscapes conjured from the stunning horizons witnessed during his travels.
Emboldened by critics and collector’s enthusiasm, he narrowed his focus there and pushed the creative boundaries of landscapes to arrive at the distinctive and radiant style for which he is known. He never paints from a photograph – nor does he do studies. Instead, he enjoys the freedom and creative abandon to see where an impulse might lead. The intensity of working over a single piece to finish it makes the process very physical. Well known for his mosaics, splashes and seemingly endless ways of abstracting reflections, he lets layers of paint – acrylics on canvas – drip and flow, just letting things happen. “I was taught in college to let the paint find the imagery,” he recalls.

Ford then goes in with skilled precision to create the light, details and natural elements that define his fascinating style of painting. Ford’s sense of nature is not a Romantic’s wild and angry universe. To the contrary, his distinctive paintings reflect a palpable optimism and vibrant confidence. The easy precision, subtlety and repose of his paintings may well derive from that Asian aesthetic he developed in his early years. Now he’s arrived at what he believes to be his true destiny. “I’m grateful every day that I get to paint for a living,” Smith says, “I feel like the luckiest guy on earth, and I think that energy and optimism is reflected in my work.”
Ford resides in Roswell, Georgia with his wife, Cristi, along with their two dogs and two cats. Their adored, 19 year old daughter, Hilary, also lives in Atlanta and is a talented, burgeoning filmmaker. Their son, Brian (a rising professional at AIG), also lives in Atlanta with his wife, Adrienne – and gave birth to their first grandchild, Nora 9 months ago!