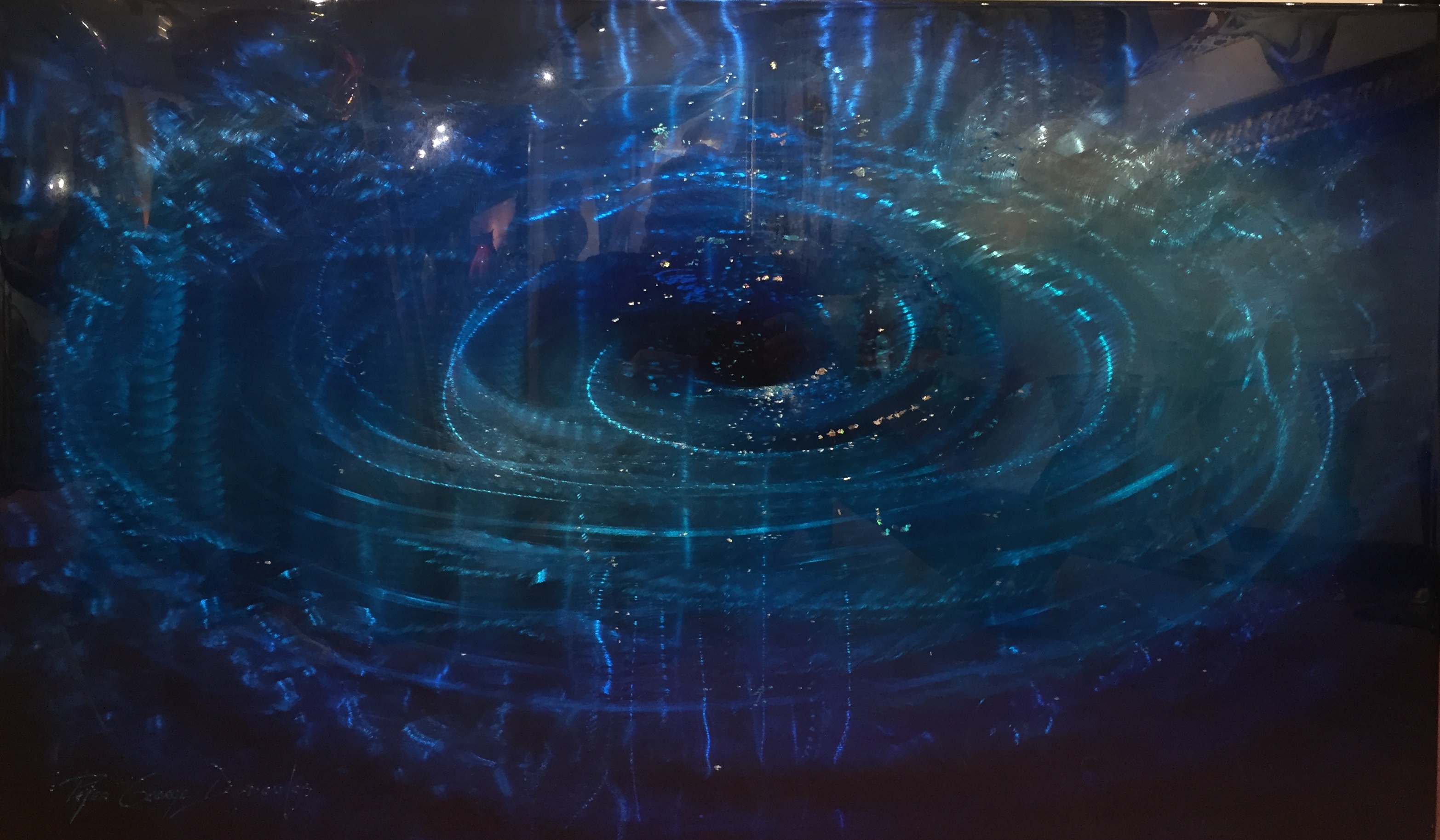 Peter George Avdoulos is a native San Franciscan self taught artist . Recognition of his inclination towards art from his parents and family was encouraged as he gravitated towards drawing from an early age, continually drawing and then painting with enamels, acrylics and oils. He has continued to express his ideas and art through a variety of media , substrates and subjects . He now works constantly at exploring new approaches and venues for his work at his Liquid Metal Colors Studio in Sonoma County, California.

Background
Early Years, Influences and Education
Marine life (contemplating marine biology as a life decision for a time period ) and animation films were favorite subjects in his early years. The artist’s parents ( my Father, R.I.P.- could draw a detailed sketch of the Acropolis from memory in front of me in minutes ) grandparents, uncles and aunts ( Tula Christopher’s oil paintings were quite beautiful )were very supportive. “They would always have paper, pencils, pens and bought books on sharks, whales dolphins , Disney and Warner Bros. films for me. My aunt Chrissie actually took me as a child  a Jacques Cousteau lecture and got him to autograph my Jacques Cousteau oceanic book as he was running late from the appearance and lecture. By 10 years old the young artist was using the Testors enamel paints from his models kits and started reverse painting on clear acetate sheet protectors after drawing the  various cartoon characters on the front in ink and also painting the backgrounds to copy the Warner Bros, Hanna Barbera and Disney cartoons he watched. One visit to Ghirardelli Square included a visit to the art galleries and Circle Galleries, Ltd. Which had an animation art exhibit. Peter was excited seeing these  paintings and his mother explained to the gallery Co-owner her son did similar work .The owner stated he would like to see the art after some convincing that this wasn’t just a proud parent exaggerating. Upon returning,( weeks later, taking buses back from the Mission District to Aquatic park with a box of ‘cel’ art ) the director couldn’t believe Peter had created these layered  detailed artworks, and generously offered the budding young artist wall space once they were framed to hang.  Returning with the framed paintings, they were given the a chance to exhibit the work on a wall that generous owner supplied. “My mom and I returned  after they were hung and  I would stand next to patrons and tourists looking at my paintings and ask them if they liked them, and most would look at my and reply to this little kid “ sure, they’re beautiful” and then I would say’-I did them!’ well, no one believed me and some actually got annoyed, thinking I was lying. It bothered me then, but is really funny now thinking about it. That magnanimous gallery owner was the start of my gallery career !”

Philosophy on the creative process

Peter’s description regarding his process is that it becomes a fusing of ideas and energy transferring from him into the piece. Through decades of trial and error, creating and experimenting – with different techniques on metal and canvas, this has been a constant. “ You get a tunnel vision and unawareness of most everything except the work at present -being in the zone. Two dimensional substrate becomes three dimensional in appearance. “ At times, you’re watching yourself as you paint or grind the metal surfaces in a state that compares anywhere from mellow jazz music-precise but loose, to hard metal or classical- finding the  path to take- minimal,  and precise, detailed but not overdone ,the theme, colors, changing as you go and creating a really interesting painting…are my thoughts “.
“ I create my art by a symbiotic relationship. The inanimate steel and canvas always need the energy and time that I put into them to visually reflect the ideas . They sit and seem drab comparable to an blank lump before it is a sculpture. The movement, refraction of light and minor intricate shifts on the metal paintings bring to light what was always seemed there waiting , just not discovered. The metal surface has a non static kinetic energy that emanates life, created by grinding and etching upon the surface. I have a harder time parting with select paintings than creating them at times. There is a dichotomy of elation when the painting sells and a disappointment that it’s gone…thinking…” that really was a nice piece, I hope I can remember how I did it or improve on the technique next time.” This is especially true with the poured resin canvases. There are colors/techniques/effects in areas I’ve seen later when the painting is at a gallery or collectors/friends home that make me work at remembering what process made that area appear that way.

Notable Artists Influences
In his early twenties, Peter knew he wanted to hang in galleries with the artists whose work he admired. He started an artistic paint studio and was learning the trade of automotive custom paint and art, restoring, custom painting and airbrushing motorcycles. The two fine artists’ work that Peter encountered were Paul Sherstobitoff ( within the same block on Beach street that Circle Galleries, LTD. had been, years prior and Peter’s work would be later at Christian Lassen‘s Gallery later on ) and Elan Vital ( Hanson‘s Fine Art Gallery in Sausalito ). “ Mr. Sherstobitoff’s work was so three-dimensional through his textures and shadows being on a canvas- oil or acrylic painting, they were almost unreal in their depth. Mr. Vital’s work was exciting due to the sizes, colors and depth from the many layers applied. Then around 1995 or so, I was grinding a metal plate for welding and it caught my eye with the sun coming through a side window of the garage I used as my studio. Taking it closer to the window, then outside and it was love at first sight…the movement of the bright sunlight against the metal was unparalleled to anything I had seen or done ( or really paid attention to previously ) . I ground off more clean metal and went outside and found another panel and thought this could be amazing artwork. I was already hooked on Optic-Art ! I looked up metal paintings online and finally came across “The original master of metal paintings ”..Andreas Nottebohm, he did things that were amazing in photographs, and really blew me away once I traveled to see his work in person in San Francisco and later would meet with him at his studio to show him my budding neophyte ground metal career. He was a sharing and cool person and made me feel at home in his studio. Other two-dimensional artists that have inspired me and I’ve been  lucky enough to either meet,talk with, collaborate or exhibit work with along my path, ( or wish I had the opportunity to ) include Dave Archer, Red Wolf, Patrick Guyton, Paul Tapia, Craig Fraser, Fitto,Tim and Amy Cantor, Mark Rothko, Steve Kaufman, Peter Max, Vladimir Kush, George Green, Daniel Merriam, Christian Riese Lassen , George Sumner, Joaquin Barrios, Eric Christensen , Jack Nordby, Troy Carney, Javier Mulio and Dario Campinale… though this list goes on indefinitely…my heartfelt thanks to those true artists that I met and were generous and supportive, and real.