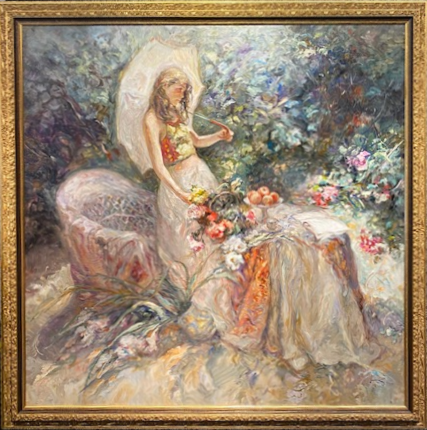 Born in 1941 in Valencia, Spain, Royo began demonstrating his artistic talent early. At the age of 9 his father, a prominent physician and avid art enthusiast, employed private tutors to instruct Royo in drawing, painting, and sculpture. When Royo turned 14 he entered the San Carlos Royal Academy of Fine Arts in Valencia. Upon turning 18 Royo continued his artistic studies privately with Aldolfo Ferrer Amblat, Chairman of Art Studies at the San Carlos Academy. He also visited the major museums in Europe at this time to study the famous masters-Velasquez, Goya, Renoir, Monet, and Sorolla among others.

During the mid-60’s-early 70’s Royo added more dimensions to his skills creating theatre sets and doing graphic illustration and restoration work. He also participated in prestigious competitions gaining major distinctions. In 1968 he began to exhibit in Spain, specifically Lisbon, Madrid and Barcelona. With positive reception of his works in Madrid, Royo received commissions to paint the royal portraits of King Juan Carlos and Queen Sofia. He received subsequent commissions to paint the Judges of the High Magistrature and the Court of Justice, as well as prominent political and society figures.