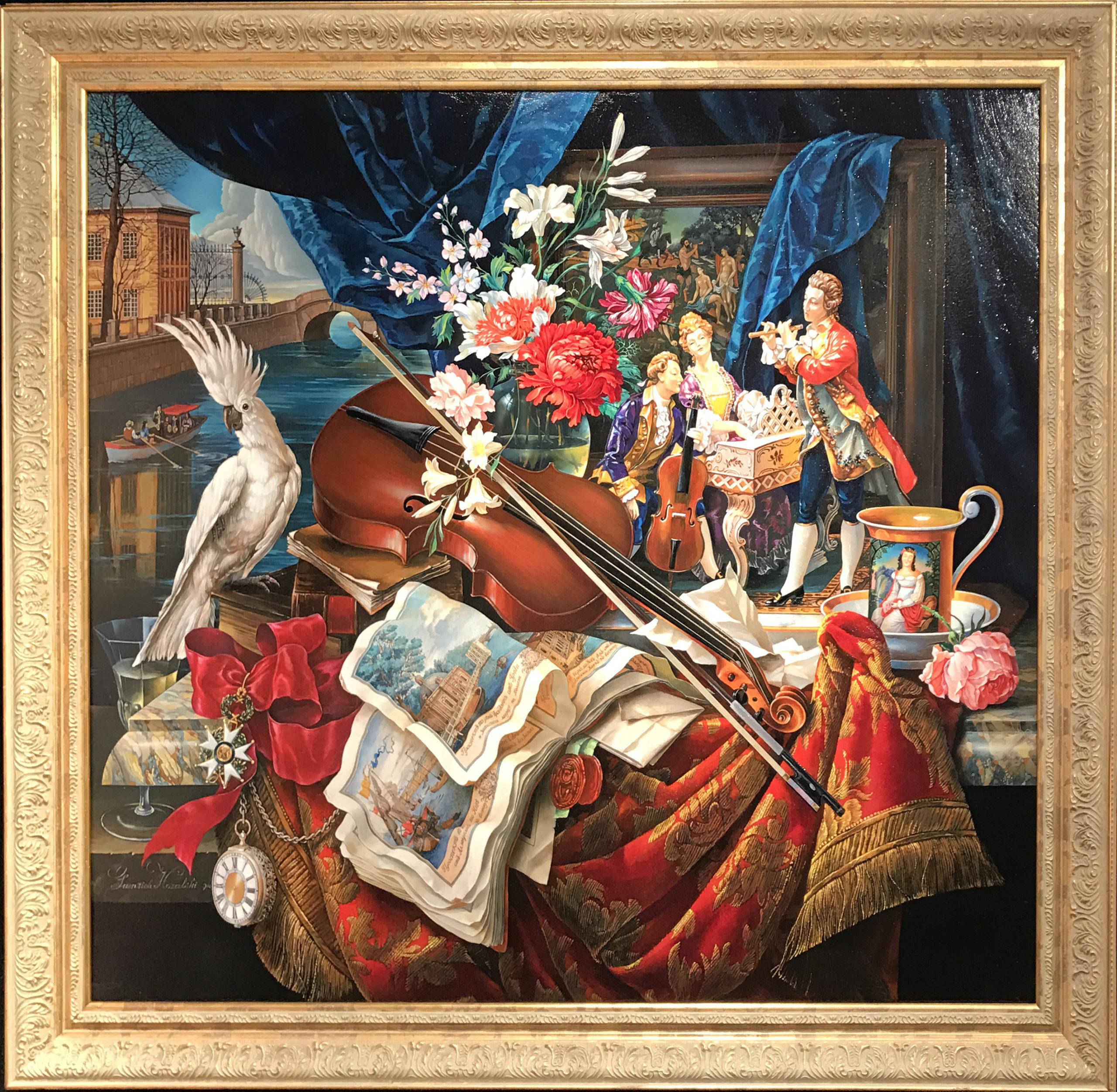 GUENRICH HOZATSKI
Guenrich Hozatski was born in Russia in 1930. As a young man, he studied at the Academy of Fine Arts in St. Petersburg, from which he graduated in 1955. Five years later he became a member of the Artist’s League of Russia One of Guenrich’s many accomplishments is restoration of the paintings and panels of the Amber Room in the Summer Palace of Catherine the Great. During World War 11, amber mosaic panels and a number of priceless 18th century paintings, were removed from the walls from the walls of the palace and later disappeared As there was no hope for restoration of the panels as they had once been. Guenrich and his son Vladimir were commissioned to paint as close as possible to the original panels, and to recreate the stolen paintings in their own style. He and Vladimir for years to recreate the still lives and landscapes, and to temporarily paint the walls to simulate amber mosaic panes in hope that, one day, the originals will be found. The project received world attention, and in 1978-1979 the paintings were exhibited in Paris. Some exemplary paintings from this project are on permanent display at the Amber Museum in Kaliningrad, Russia.
Later, when President Mikhail Gorbachev came to power in 1985, he and his wife ordered to redecorate the President’s Black Sea Dacha in the Crimea. For the reception area, known as the Tea Room, Mrs. Gorbachev commissioned the triptych “Gurzuf” from Guenrich Hozatski. It took over three years for the artist to complete the commission and in January of 1989 he traveled to the President’s Dacha to install the paintings. This honorable commission was the highest recognition of a Russian artist’s talent, as only the most well-regarded were invited to do work for the leader of the state. The Hozatski’s work has been admired by many foreign dignitaries during their visits to the President’s Dacha. Since the dissolution of the Soviet Union, the Crinea has been annexed by the Ukraine, and the dacha is in use by the Government of Ukraine and it’s president, Leonid Kravchuk.
Guenrich maintains studios in Russia and Europe, and resides in the Crimea. His work is on permanent exhibition in the Museum of Amber in Kaliningrad, Russia, Catherine the Greats Summer Palace Museum, and in the Historical Museum of St. Petersburg, as well as several other notable museums. His work was previously shown at the Alberti, Roy Miles, and Giugliardi Galleries in London. Currently, Petris Fine Arts is honored to offer this beautiful and rare artwork.