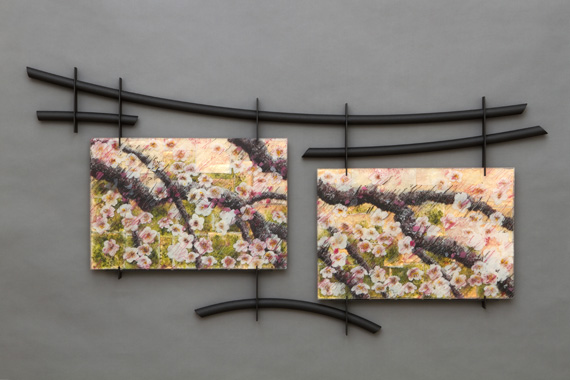 Roger Thomas was born in Los Angeles, California in 1951. He began working with stained glass in the 1970s, and by the 1980s was developing his own innovative techniques with fused glass. After moving to Portland, OR to take a job at his favorite glass factory in 1988, he established his second studio and began to “make things” in earnest.
Roger is something of a charming curmudgeon. He finds the familiar errands of life stressful and irritating, but thinks nothing of spending an afternoon wandering the neighborhood with camera in hand. And while on these walks, he’ll find beauty in the typical trees and flowers and gorgeous sunlight of Portland, but also in the oddities-the plastic horses chained to the old carriage rings in the curb, the kitschy yard lights, sidewalk chalk drawings and the weeds growing in the parkways.
He brings this same dichotomy to his artwork. Easily distracted by color, design and structure wherever he goes, he then attempts to extract the essence of form with a graphic shorthand in order to communicate his view of the world to others.
And he chooses to do this with glass, a medium so belligerent and unyielding that it creates a narrow set of confines for him to work his will on. It demands whoever wishes to master it learn to work their own magic.
By now, these techniques are second nature to him, enabling him to create pictorial and abstracted images while allowing the glass to voice it’s own true nature. He states that he wishes to know his medium as well as the Asian calligraphy master, who, after a lifetime of study, bends the ink to his desires and expresses the world in a single brush stroke. Or single kiln-firing. Roger approaches glass as a sculptural medium and ends up creating masterful paintings.