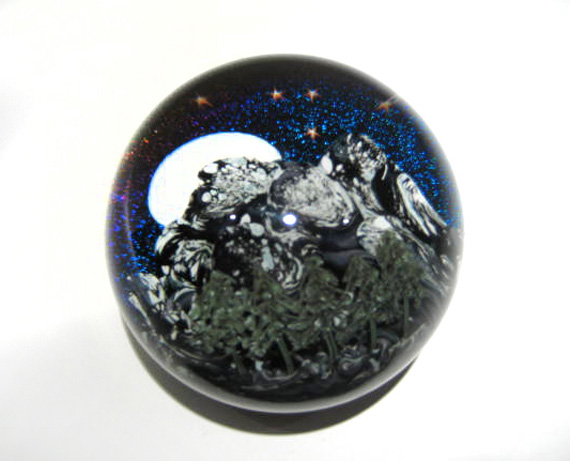 Steven Lundberg was born in Chicago in 1953 and moved with his family to Santa Barbara in 1958. As a young man, he worked as a telephone technician. In 1972, his creative desires led him to become an apprentic glass blower to his older brother James. James Lundberg, with fellow artists like Stuart Abelman were instrumental in the early development of the studio glass movement. In 1973, Steven and James formed Lundberg Studios in Davenport California. Steven’s skills continued to grow, and he has since developed into a master glassmaker. His talents include shaping, decorating, casting, lampworking, torchworking, and lapidary. His inventive skills as a fabricator of technical equipment, has gained him recognition in the world of glass-blowing. His ability to create complex glass formulas has enabled him to design glass art that is envied by his peers. With the untimely passing of his brother James in 1992, Steve continued his work at Lundberg Studios. In January 1997, along with his wife Ola and son Justin, Steve created his own studio in California.
In 2002 in the process of moving to his state of the art studio in Oregon, Steven was diagnosed with ALS. In this talented Lunberg family, Steven’s son Justin has inherited the skills of a master glass blower. He continuing the family tradition creating his own series of art glass. The new Oregon studio has been completed under the influence of Steven and new and exciting works of art are taking form . Steve’s creations are on display in many permanent collections such as The Smithsonian Institute, the White House, The Corning Museum of Glass, the Philadelphia Museum of Art, the Art Institute of Chicago, The Museum of American Glass and the Bergstrom-Mahler Museum. Steven Lundberg Glass Art is exhibited in fine galleries and catalogs worldwide. He has collaborated with many distinguished glass artists, including Rick Ayotte, Bob Banford, Randall Grubb, Barry Sautner and Victor Trabucco.